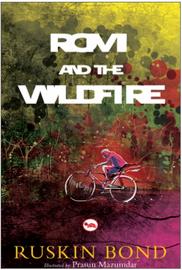 “Romi and The Wild fire” is a different type of adventure of the boy Romi in the forest. Bond narrates how Romi is able to escape from the forest fire with Teju. Both are sensitive, energetic curious and innocent children. Bond underlines his distrust on destroying the forest and expresses his concern to safeguard the wealth of wild life and the greenery of the forest. The forest is the backdrop of this story. Children get enamored of Romi’s heroic aptitude. Packed with courage, confident, hope, intrepidity,helpfulness and coolness, Romi symbolizes Bondian humanism in helping his father’s recovery and rescuing Teju from the forest fire.Through out the story Bond makes his readers aware of the fact that nature is not always bird song and dew-drenched daffodils but it sometimes becomes red in tooth and claw as in “Sita and the River” and “Romi and the Wildfire”. The planned destruction of trees on mountain slopes in the name of progress and development is the theme of this short story. Bond charmingly documents the childhood activities through Romi and Teju.

The wonderful book I have read is ‘STAND STRONG’ written by Nick Vujicic, an internationally – known motivational speaker and evangelist, celebrated for his extraordinary life despite being born limb less. This inspirational  book  was published by WaterBrook Press  first in the year 2001 in Colorado.

Some of his bully defense systems are:

In Stand Strong, Nick Vujicic gives us strategies for developing a ‘ bully defense system’ to handle bullies  of all kinds by building our strength from the inside out. He also inspires  us by saying that if a man without limbs and legs like him can  become an international figure,  then anyone can release  the power to become all they were created to be.

My rating for this awesome book  written in simple and beautiful language is 100%. This book inspired me a lot. It helps us to prepare ourselves to successfully handle our bullies. This book also teaches us the importance of being empathetic than sympathetic.

Unfinished portrait, it is one of the six novels written by Agatha Christie under the pen name ‘Mary Westmacott‘. The book showcases the unique narrative skill of Agatha Christie.

The book starts with a foreword in the shape of a letter from the author to a friend in the book trade. The author is a portrait painter who is not able to practice his craft and has taken up writing. He tells us about his meeting with Celia, the subject of the book, in an exotic island when she was at the most difficult point of her life, contemplating suicide. He managed to dissuade her and took her to his hotel where she recounts the story of her life.

She lost her father when she was very young. After that everything was her dear mother and her elder brother Cyril. Celia becomes more attached to her family home after the early death of her father. She has an eccentric but loving granny who lives in London.

Eventually she marries young Dermot, who is rather poor, but seems to madly love her. They live in comparative poverty. Later on he finds a good job and take up golf and spent lesser and lesser time at home. Celia finds a creative outlet, writing stories not based on reality but just what she dreams up, which is cruelly diminished bi her unimaginative and two dimensional husband. Unfortunately for Celia their daughter, Judy, takes after her father which makes Celia feel like an outsider in her own married life. And this leads her to the verge of suicide.

This story is rather heart touching and at the same time is mysterious. My favorite character is Celia’s mother, Miriam, as she is so loving and caring. The book gripped me and made me turning the pages. I rate this book 100 out of 100. I recommend this book to all Agatha Christie as it is one of her best novels.

The fifth of Archer’s Clifton Chronicles begins with a bang as Archer examines his fictional clan’s financial, political and personal lives in the 1960’s.

Emma Barrington Clifton’s family company, Barrington Shipping, has launched the luxury liner MV Buckingham, but her arch enemy, Don Pedro Martinez, an Argentinian gangster and Nazi sympathizer, hires the Irish Republican Army to sabotage its maiden voyage. A bomb is planted by the IRA during the maiden voyage of the MV Buckingham across the Atlantic. When the bomb goes off, how many passengers on the Buckingham lose their lives? You will only find out if you read the opening chapter of Mightier than the Sword.

Meanwhile, Emma Clifton’s husband Harry (a writer) visits his publisher in New York and learns he has been elected as the new president of English PEN. He has always been a supporter of Russian author Anatoly Babakov, who is imprisoned in Siberia for authoring “Uncle Joe” -an expose of Stalin. Harry becomes determined to use his new position to try to get Anatoly released from prison.Did he succeed in his mission?

We have the story of Harry and Emma’s son Sebastian who turns out to be quite a smooth operator when it comes to business however when he makes a fatal mistake in not honoring a promise he made to someone to close a deal, Intrigued by this his fiancée, an American beauty, Samantha Ethel Sullivan leaves him. Sebastian is devastated and Archer does have some surprises for his readers in the latter chapters concerning Samantha and Sebastian.

Sir Giles Barrington ,Emma’s brother and Harry’s best buddy is now a minister of the Crown, and looks set for even higher office, until an official trip to Berlin does not end as a diplomatic success. Once again, Giles’s political career is thrown off balance by none other than his old adversary, Major Alex Fisher, who, for the second time, is selected to stand against him at the general election. But who wins this time?

Meanwhile, Emma’s in court defending herself against libel charges brought by vile former sister-in-law Lady Virginia Incidentally, Virginia is suing Emma for libel pertaining to Emma’s statements concerning Virginia that were made during a board meeting and entered into the company’s minutes. Towards the end of the novel, Archer devotes considerable ink to a very intriguing trial.

Originally planned to be the fifth and final book in The Clifton Chronicles series, Mightier Than The Sword, which is to be followed by two more volumes, is an adrenaline-fueled read with plenty of surprises dealing with the business side of the story, boardroom power struggles, politics and terrorism.

Filled with Characters the book takes you through a wonderful journey from England to Russia and the United States.

Though the fifth novel in the Clifton Chronicles series it is accessible as a stand-alone story. With all the trademark twists and turns that have made him one of the world’s most popular authors, the spellbinding story of the Clifton and the Barrington families continues.