“The Hunger Games” A must read series of 3 books ! Highly captivating..Beautifully written by Suzanne Collins !Check out the movie too !

Wade Davis, explorer-in-residence for the National Geographic Society, on Monday won the Samuel Johnson Prize for Non-Fiction for his account of George Mallory’s ill-fated attempt to scale the heights of Everest.

Harry Potter’s Cloak of Invisibility that hid him from Muggles and wizards alike may one day be a real thing.

Engineers at Duke University have developed the first functional ‘cloaking’ device, which is able to guide the electromagnetic waves around an object and then re-emerge on the other side, effectively hiding the object.

Clothes that render the wearer invisible have existed in mythology long before J K Rowling wrote Harry Potter. Greek god of the underworld Hades was given an invisibility helmet by Cyclopes to help him in the battle against the Titans.

The electrical engineers first created a functional cloaking device in 2006 but it was not perfected. The new design fixes the problems from the original device.

The goal of this type of research involves “taming light”, with the team creating meta-materials, which are man-made objects that have properties absent in natural ones.

Cannot stop myself from reading HP no matter how hard I try…reading Harry Potter and the prisoner of Azkaban,,,,

“The Last Lecture” by Randy Pausch, inspiring and gripping. A must read.

“Goal Butterfingers ” is the second one in the butterfingers series published by the author, khyrunnisa A.  Amar kishen or butterfinger(a name given to him by his father) as he is popularly known has got a penchant for dropping things is obsessed with football comes with a brillilant  plan of   a “Wold Cup Football” match in the Green Park School,a  school football tournament where each class will play as a different ‘country’.  But this plan also dooms with obstacles, when  the new English teacher, Sourpuss, puts a stop to football practice. When Amar and his friends participate in a protest rally, trying to prevent a pesticide factory from coming up, their Princi hands out match bans.  And in the final world cup match with “Butterfingers” as the goalie wins the world cup match and the winners trophie is handed over to butter-finger and team by the famous writer “Bikram Dev” who is none other than the new English teacher Ms. Deshpande,”Sourpuss”. 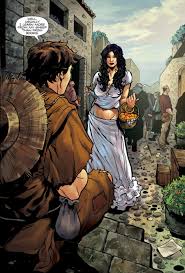 Reading “the Alchemist” again in graphics.